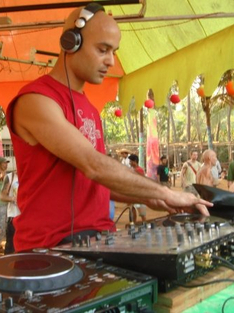 Born in Israel, DJ ZIG was fascinated by the first electronic dance music of the late 80’s, such as New Order and Depeche Mode, and partied through the early days of trance music in the Israeli rave scene in the 90’s.

Got his start when a promoter friend was impressed by Zig’s understanding of the trance music, offering him to play at a club.  He started traveling to India and was influenced deeply by the trance style of Goa.  DJ ZIG’s career took off when he was invited to play at outdoor parties in the Indian Himalayas and later in Goa.

One summer in Europe, while DJ ZIG was involved in the growing trance scene in Germany, the organizer of the notorious annual Antaris festival booked him to join the roster. Being included in an event of this magnitude and listed along with the world’s elite DJs, brought him the recognition that took his career to the next plateau.

DJ ZIG has since played trance for more than 20 years in clubs and festivals all over the world.  His style has evolved with the years and become more progressive, groovy and warm with a touch of House and Electro. DJ ZIG describes his specialty as, “Making people dance & smile at the same time”.